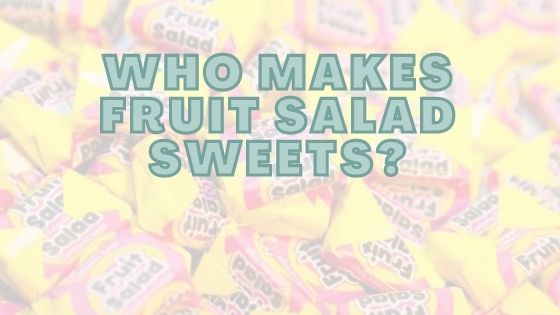 Do you want to know who is behind the delicious raspberry and pineapple flavored chews that are fruit salads? Well, this is the manufacturer behind such delights!

Interestingly, the Barrat Brand actually went through a rebranding. back in 2013.

The parent company (Valeo Confectionary – which too went by a different name at that time – Tangerine Confectionery), actually changed the Barratt name to ‘Candy Land’.

And an entire range of products and sweets (including Dip Dab, Refreshers, Sherbet Fountain, and Black Jacks) had product packaging changed, too.

However, in 2018, Barratt was restored to revive the sentiment of classic sweets, and product packaging was redesigned back to a more original look.

While there are no current plans to change the Barratt brand, or sweets such as Fruit Salads, that will ultimately be at the hands of one of the largest private and independent confectionery companies in Europe (Valeo Confectionary).

With an annual turnover of £150,000,000 and 1500 employees, these sweets are owned and manufactured by one of the biggest in the industry!

Valeo Confectionary also owns and operates the following brands and products of sweets:

Where Are Fruit Salad Sweets Made?

Fruit Salad sweets are made in factories in Spain, run under the Barratt brand but operated by Valeo Confectionary.

Can you still get fruit salad sweets?

You can still get fruit salad sweets, they are available at the larger supermarket stores, independent sweet retailers, and via sweet shops and stores online.

When did fruit salad sweets come out?

Fruit salad sweets were first invented and sold in 1920.