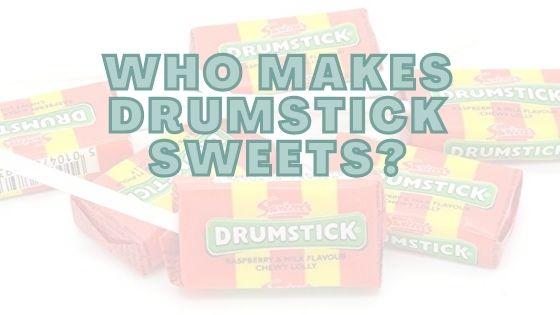 Do you want to know which manufacturer is behind those delicious milk and raspberry flavored lollies? Well, you’ve come to the right place. Here is what you want to know.

So, who makes Drumstick sweets? Drumsticks are made by Swizzels (formally Swizzels Matlow Limited) – a confectionery manufacturer based in Derbyshire, the United Kingdom.

In fact, these delicious chewy sweets have been sold since 1957 – when they first began being sold in their recognizable lolly gorm.

Since then, a range of flavors and products have been released – including bars, chews, and most recently the Drumstick Squishy range!

Where Are Drumsticks Sweets Made?

Drumstick sweets are made in the Wick factory, which is based in New Mills, Derbyshire, England.

20% of sweets are exported out of the UK, to over 20 countries – most of which are across Europe.

The other 80% are sold to the UK market – where these sweets remain a highly recognized and appreciated brand.

Other Sweets Made By Swizzles

Drumstick sweets were invented by brothers Maurice and Alfred Matlow; who launched Matlow Bros. Ltd in 1928. It was not until 1957 that they launched their iconic Drumstick Lollies to market.

Is Swizzels a British company?

Swizzles is a British company; originating in London, England.

Swizzles is owned by three members of the founding families; Nici Matlow, Jeremy and Nici Dee