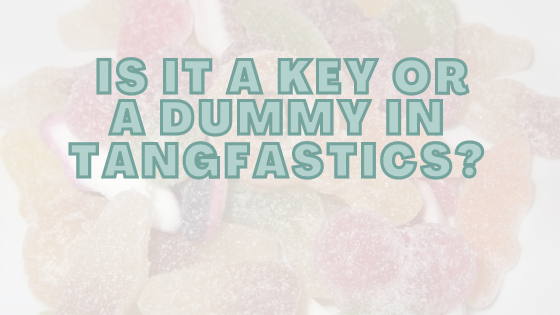 A dummy or a key? The great dilemma and one of the hottest debates of recent times. Well maybe in the Haribo world, at least. Nevertheless it’s an important dispute that needs to be settled. So that’s what I am here to do.

So, is it a key or dummy in Tangfastics? Despite looking like a key and commonly being assumed as such, it is actually a dummy. This can be confirmed by Haribo directly, with reference to them being keys directly on product packaging/the official company website.

That’s how I feel at least.

But it’s good we got it settled.

And if you’re still not happy with it, then just check out this screenshot directly from the official Haribo website which states quite clearly what they are supposed to be:

In fact, this is even started dirextly on the packaging on some variations of Haribo Tangfastics.

Now, what about the rest?

Let’s settle that now shall we.

What Are The Sweets In Tangfastics?

The sweets in Tangfastics are fruity cherrys, cola bottles, dummies and foam crocodiles.

Dont even get me started on the Haribo Starmix Egg debate either!

I actually cleared that up too:

Is It An Egg In Haribo Starmix?

Why are Haribo dummies called dummies?

Haribo dummies are called dummies because they are designed in the shape and style of a dummy and are intended to be sucked opposed to chewed.

What Flavour are the dummies in Tangfastics?

The dummies in tangfastics are pineapple and strawberry flavored.

Are gummy bears in Tangfastics?

Gummy bears are not in tangfastics. They are instead, in Haribo Starmix or Haribo Gold Bear products.