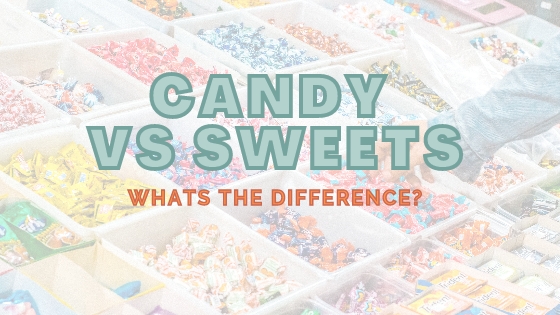 Have you seen the terms candy and sweets used interchangeably? Are you wondering what the right term to use is – besides, are they the same or actually quite different? Well, you’ve come to the right place. Today, I am going to walk you through the differences, so you know for good!

So, what is the difference between candy vs. sweets? Candy is the term that is primarily used in American English, whereas sweets is the term used in British English. Although, sweets as a term is more encompassing – including a range of foods where sugar is one of the main ingredients. The term candy, however, is generally used to describe confectionary items only.

Or maybe you’ve just been watching a popular movie or show from across the pond.

Either way, Candy and Sweets are actually used quite differently.

Let us now explore why!

What Is The Difference Between Candy and Sweets?

The main difference between Candy and Sweets is where the terms are used. Candy has been adopted into the American English language, whereas it is not commonly used in British English. In British English, the term Sweets is used instead.

However, it actually goes one step further.

Not all candies are sweets, and not all sweets are candies.

The term “sweets” in British English is typically used to describe a range of sweet foods, from cake and puddings (desserts) to boiled confectionary.

Whereas in American English, the term “candy” is used to describe predominantly confectionary, or food that is made predominantly of sugar or encased in a sugary coating.

So, “candy” can include confections made with other ingredients, too, such as chocolate, fruits, and nuts.

In essence, candies belong to the wider category of sweets.

Taking it one step further, “candies” are often made from melted sugar before being resolidified into a certain shape, along with other flavorings.

In America, candies are sold at the candy store (among other places), and Americans will eat candy bars such as Snickers.

In the UK, sweets are sold at sweet shops (among other places), and the British will eat chocolate bars such as Snickers.

Naturally, there are a lot of candies and sweets that are produced in the US and not in the UK (and vice versa).

Why do Americans say candy instead of sweets?

Americans say candy instead of sweets due to historical and etymological (the origin of words) reasons. It is believed that the Greeks introduced the word candy into the American Language, and the term has been preserved. Whereas in Britain, the usage has diverged.

Do Americans say candy or sweets?

Americans use the word candy instead of sweets.

British people use the word sweets instead of candy.

What is candy called in Australia?

Candy is allied ‘lollies’ in Australia.

Is chocolate candy yes or no?

Chocolate can be candy, but it is not always – it varies from brand to brand or recipe to recipe. Any chocolate that contains flour or is set via refrigeration is not considered candy.

Why do Americans call chocolate as candy?

Americans call chocolate candy because the term candy is a general term that can refer to any sugary treat that can be chewed and eaten. Candies are generally small and bite-sized. However, what is considered candy varies from product to product, context to context.

What is the difference between candy and candies?

What is the difference between sweet and sweets?