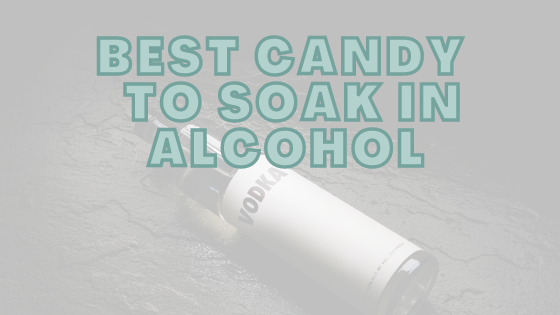 When it comes to digestible delights that stimulate the taste buds, there are two categories that I enjoy indulging in the most. The first, as you have probably guessed from reading this website, is candy. The second is liquor. Yes, that’s right. If I’m not stuffing my face with a bunch of my favorite candy pieces, you can bet I’m probably enjoying a nice cocktail. But let me tell you a little secret if you don’t already know. Candy and liquor can be enjoyed…wait for it…at the same time. ‘Of course, they can. You simply sip your liquor and then take a bite of your candy. Nope. That’s not the kind of simultaneous action I’m talking about here. I’m combining the two together as one to enjoy. This is done by soaking candy in alcohol. And that’s what we’re going to talk about today!

It’s essential that your combinations work; otherwise, they’ll be little to no soaking, or they will end up fighting over your taste buds.

The result is they’re not going to taste very nice.

So let’s avoid that, shall we?

But I get it. You likely want to learn about specific combinations.

Let’s run through them!

Best Candies To Soak In Alcohol

There are many great candy and alcohol combinations that you can discover, more so than just the ones referenced below.

So if you experiment, you could become the new pioneer for a new combination.

That being said, candy and alcohol enthusiasts have been testing combinations for some time now.

We know what works and what doesn’t.

Below is a list of my top 5 favorite candy and alcohol combinations.

This combo is the classic. It’s the martini of candy and alcohol combinations. Some say this was the first combo to be invented. It remains ever popular, and for good reason.

Fruity gummy bears possess such an enjoyable soft, chewy texture that they make the ingestion of alcohol dangerously easy here.

Seriously, you need to remember that these do contain alcohol. Otherwise, you’ll end up eating them like normal gummy bears and end up getting very drunk…but maybe that’s what you’re going for.

The fruity flavors of the gummy bears combined with the strong vodka compliment each other so well.

It’s no wonder this remains a fan favorite, and it looks set to stay that way for a while.

While we’re on the subject of gummy candies, let’s next take a look at the gummy worms. Except for this time, we’re not soaking the candy in vodka.

This time, it’s time to get your old friend from Mexico out. Yes, come here, Mr tequila; I want you to meet my pack of gummy worms.

After you’ve issued these wiggly chewy worms with tequila, they’ll be more like snakes. Just kidding. However, they will expand (we’ll talk a bit more about that later.

Tequila-infused gummy worms are a great taste combination. A Blanco tequila with a citrusy flavor works well, but a Reposado will complement the gummy worms’ sweet flavors.

Time for a rum combo, specifically dark rum! People usually enjoy a rum and coke in a bar. So it’s no wonder rum combines well with cola bottles.

Haribo’s cola bottles work best, obviously. Why dark rum? Well, even though I myself prefer a spiced rum, dark rum has a molasses flavor that easily melts into the cola bottles.

It becomes your very own rum and coke in a cola bottle. Delicious and enjoyable for all. Go easy, though.

I ate so many of these once I started trying to drink them as if they were real bottles of cola!

Bit of an unusual one. That’s exactly why I love it. Early I mentioned that harder candies struggle to absorb the alcohol as well.

Luckily Twizzlers, although hard in texture, are very, very thin. This means alcohol can easily penetrate the hard texture as there isn’t much ground to cover.

Soak your Twizzlers in a fruity vodka; the exact flavor is up for you to decide upon. I like to use a kiwi strawberry vodka.

Last up on the list is one for those who don’t want to feel the effects of the alcohol too much. Aperol has a nice low percentage of alcohol that will still add a vibrant tang to candy.

It goes very well with Gummy Cherries as the two delights compliment one another with their different flavors.

So if you’re not planning on getting totally wasted, this would be a good option to go with.

That doesn’t mean you can eat these as if they were normally Gummy Cherries. If you eat enough of these, you still might be reaching for a glass of water to sober you up!

Best Alcohol To Soak Candy In?

The best alcohol to soak candy in is spirits. Spirits that, of course, compliment the flavor of the candy. The two most popular used and that are known to work well are vodka and rum.

Let’s face it; vodka is for a particular taste when drunk neat. But it’s become a staple in the cocktail world.

Well, it dominates the candy and alcohol combo world as well. Its versatile flavor works in most recipes combining well with all suitable candies.

Then there’s the good old rum. Rum is great for more exotic candy and alcohol combos for when you want to feel like you’re eating on the beach.

What’s great about rum and other spirits is that they have such a high alcohol content. Consequently, you don’t have to cover the candy in too much liquor.

This means that you won’t risk the liquor overwhelming the candy.

How Long Do You Soak Candy In Alcohol?

Generally, you will have to soak your candy in alcohol for 24 hours.

Now, of course, this may vary depending on the recipe you are following.

However, the average soak time is about 24 hours. By waiting this amount of time, you allow the candy to fully absorb and be infused by the alcohol.

This means this is when they’ll taste the best and also when you’ll be able to feel the effects of the alcohol from them.

Whilst the soak time may seem like a lot, it’s totally worth it.

The prep, on the other hand, takes a mere 2 minutes. So, you should definitely make sure you do this a day before your friends come round for that candy and alcohol combo binge.

How Much Alcohol Do You Soak Candy In?

How much candy you soak in your candy will depend on the recipe you follow. Ultimately, you want the candy to be covered in the alcohol in the bowl.

A standard vodka gummy bear recipe will suggest you use approximately 150-200ml of vodka for every 200g of gummy bears.

It’s worth saying at this point that it’s worth forking out for reputable spirits brands. Trust me; you can taste the difference!

How To Soak Candy In Alcohol?

You soak candy in alcohol by doing exactly that. You place the candy in a bowl before pouring alcohol in. Then you leave it to soak for 24 hours.

We’ve spoken a lot about the great candy and alcohol combos you can create and enjoy.

But now it’s time to find out exactly how you create them in the first place. So, let’s go through the typical method.

First, place your chosen candy in a bowl.

Second, pour your chosen liquor into the bowl. Pour enough so that the candy is completely covered.

That’s your prep done. Now you have to wait.

You can cover or refrigerate the bowl, but it’s not necessary.

Once you’ve waited for the time which your recipe has suggested to pass,

You will notice that they have gotten bigger. Maybe even as big as 3 times their size. Of course, they have. They’ve just absorbed a load of liquor!

Drain any exercise alcohol left in the bowl.

Yes, you can drain it down your mouth if you so wish. I’m not judging you.

The waiting times for each combo will depend on the specific recipe you are following.

Candies And Alcohol To Avoid

We want to avoid candies that don’t absorb the school, candies and alcohols that don’t taste well together, and candies with a high quantity to low proof rate.

Of course, you want the candy and alcohol combo to taste good. So it’s best to avoid candies and alcohol that don’t work well together.

This might take a bit of experimenting. If you conceive a combo that hasn’t yet been put out there with a recipe, the chances are the combo is not compatible.

But it’s worth having a go if you want; who knows, it could be the next big thing.

You won’t find many combo recipes that include beer and wine. This is because they struggle to taste good with candies.

The other reason is their quantity to low proof rate.

As you’ll have noticed, the majority of candy and alcohol combos use spirits. This is because you don’t have to cover the candy in as much liquor.

After all, it is so strong. The infusion process is, therefore, more effective.

If you’re still here having resisted the urge to immediately cover a bowl of gummy bears in vodka, well done! We can rest assured that you’ll drink responsibly…or, in this case, eat responsibly.

Good luck with any combos you experiment with.

But remember, stick with spirits!