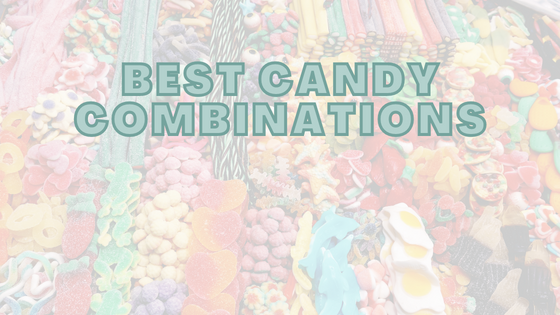 All of us here love candy. That’s why I’m writing about it, you’re reading about it, and we’re both probably eating it. I am as I write this article. I think I have a problem…but anyway!

The point is candy is fantastic. Can anything beat it?

Well, yes, I would argue there is something that can beat it…DOUBLE CANDY!

So, today we’re going to explore the luxurious world of candy combinations.

Combining candy is a complicated business that can lead to disappointment. You may have a special, favorite candy that you’re eager to mix with others, but sadly, it just doesn’t seem compatible.

Finding the right combinations can therefore take some experimenting, and trust me, I’ve been through all of this.

So to help you on your way with some inspiration, here are my top 5 favorite candy combinations:

Let’s get this show on the road. Pretzels and Whoppers. Why do they work so well together?

These two delights offer the right amount of differentiation without disrupting the balance of textures and tastes held between them.

Texture-wise, you get a nice amount of crunch between the two, which isn’t overwhelming.

On the taste side of things, the saltiness of Pretzels surprisingly compliments the mouth-watering milk chocolate sensations going on in the whoppers.

More people really should know about this brilliant candy combination.

Skittles, as you know, are a delicious sugary fruit candy that is universally adored. Good n’ Plenty is a lesser-known licorice candy.

These two candies belong to vastly different ‘flavor families,’ yet miraculously, they are brought together to create a very special concoction.

This means one is not more overpowering than the other, and you are therefore able to focus on enjoying the complex array of flavors the combination produces.

We’re using another fruity candy this time with Starburst Minis, but instead of combining them with licorice candy, we’re using a sour type.

They are, of course, Sour Patch Watermelons.

Again, both belong to different ‘flavor families’ although it could be argued there is more similarity between the fruity and the sour.

Combine these two candies, and your tongue will receive a very pleasurable new experience.

What’s so enticing about this combo, though, is the joining of the textures.

Both are chewy and gooey but in their own rights. You dig into these together, and it’s a party of gooey miracles in your gob!

Take a caramel chocolate bar of your choosing, whether it be Galaxy, Cadbury’s, or whatever, and combine it with Reese’s Pieces to find out.

The salty taste of peanut butter explodes when joined with sweet caramel.

There’s a wonderful balance of textures here, including goo and crunch, that will do special things to your taste buds.

There are similarities here, yet enough differentiations to make this a combo worth trying!

The final combination. An unusual one perhaps that you weren’t expecting.

The texture of these two candies is hard, crunchy, and chewy. So, they’re rather similar. However, the bonbons’ powdery surfaces add a fascinating dynamic.

Just like other combos, the similarities in the texture of these two candies allow the intertwining of different flavors to blow your mind.

You’ll find that the sour flavors enhance that citrusy lemon tang from the bonbons.

Lemon is sour already, but that added boost with another sour candy takes it to another level!

What Makes A Good Candy Combination?

A good candy combination is one of equality. By this, I mean one where one candy does not overpower the other. The two candies, in other words, are compatible.

Now, as I’ve already said, you may have to do some experimenting to discover whether or not the two candies you have picked out go together.

When combining these candies, you’re aiming for flavors and textures that complement each other.

You also need them to mix evenly together. I’ll explain a little more about what I mean by that later on.

The possibilities are endless, with so many different candy types out there for mixing, from gummies to sours to chocolate.

Sadly, not every pairing is best suited. So let’s dig into what truly makes a candy combination work.

Let’s start here. Texture and flavor both rely on each other.

Without the other, one cannot shine through in all its glory.

For example, a combination may taste great, but the texture may tarnish the delight bestowed upon your taste buds by making the combination too unbearable to get through.

What makes a good texture, then?

Firstly, you don’t want a texture that overpowers the taste and vice versa.

Specifically, you want something that is easy to eat. If you have one candy that is much harder and chewier to eat, then you’re going to be spending most of your time getting through that one.

The idea is to find balance in all areas, not just quantity. That’s what makes a true combination.

So you want textures that are different yet similar in terms of toughness. That way, you’ll put the same amount of time, effort, and enjoyment into enjoying the two separate candies.

Candies that are too different in terms of texture run the risk of causing unbalance in the combination.

At the same time, you don’t want very similar textures, particularly if the candies test similarly as well.

You’re also looking for differentiations between the two candies; otherwise, what’s the point in combining them in the first place?

The same rules kind of apply when it comes to combining the right flavors as well.

You don’t want one to overpower the other; you want to enjoy both of the flavors equally and the mixture they provide.

Going with candies that have flavors that fit into the same ‘flavor family’ if you like is a safe bet. However, it can sometimes result in a mixture that doesn’t offer enough differentiation.

On the other hand, if you go for two candies that have flavors in vastly different ‘flavor families,’ then there’s a big risk of them not being compatible.

You want to hit that sweet spot where the flavors compliment each other.

You don’t want them to taste bland.

And you don’t want them to taste weird and unpleasant.

It’s all about trial and error to see what works.

I hate to break it to you, but just because it’s your favorite candy doesn’t mean it will taste good in a combination.

You may have always believed your top 2 candies would make a great pairing, but that might not be the case. If it is, well, then lucky you!

We want the two candies to complement each other in terms of flavor and texture but guess what? We also want them to mix well in the bowl you’re eating them out of!

For instance, we don’t want heavy candy that’s just going to sink to the bottom. We want the candies to spread evenly amongst each other so we can enjoy them together, as a combination, not one brand after the other.

Some candies just will not work. For example, ice cream and chewing gum are a big no-no. I hope I don’t have to explain why!

What Candy That Doesn’t Combine Well?

So now I’ve told you what types of combinations work and what ones don’t and why; you’re wondering if I’m going to name some names.

Well, I’d be happy to. So let’s dig into some combinations I’ve come across that I will never try again!

Let’s start with the one that is at fault due to its overbearing similarities.

Milky Way and Milk Duds are similar in both texture and taste as they possess high amounts of caramel.

Now caramel lovers may get excited by this, but I would say that it’s too much caramel, rendering this combination all too similar. So what’s the point in it?

You’re going to spend ages chewing away at these tough candies when you could have just enjoyed them on their own without the abundance.

Sure, maybe it would be worth all the chewing if you were getting a great combination.

Sadly, it’s all that effort for a mediocre one.

Impossible, surely? Both of these taste great and are fun to eat. Well, you’re right. These candies are two staple favorites…when eaten on their own.

You combine them, and the textures are just not compatible. You have this unnerving combination of the rubbery Twizzlers texture and the crunchy M&Ms. It becomes a hesitant battle with the candy rather than a sweet harmonic feast.

And the taste? I’m afraid that doesn’t work either. So best to avoid this one if the idea ever arises in your mind.

When someone turns around to you and says they’re thinking of combining Skittles with Reese’s Pieces, you’d probably think they’re a genius.

After all this time, why hasn’t someone else thought of combining two candies, which many may refer to as the GOATs (Greatest Of All Times).

Well, someone already did try to combine them. It didn’t work.

Earlier on, both of these candies proved great successes when combined with other candies. Sadly, these two powerhouses don’t work well together.

I’m not pointing any fingers, but it’s the Skittles fault. They’re too powerful in flavor, leaving hardly any taste of chocolate or peanut left in the combination.

It is a tragedy these two can’t get along in the same candy bowl.

They even look the same! This is why it’s even more frustrating that they don’t combine to great effect.

With my advice, you can now embark on your journey of candy combination discovery.

Taste and texture are key.

And sadly, just because you love a candy brand doesn’t mean it’s meant for being with another!